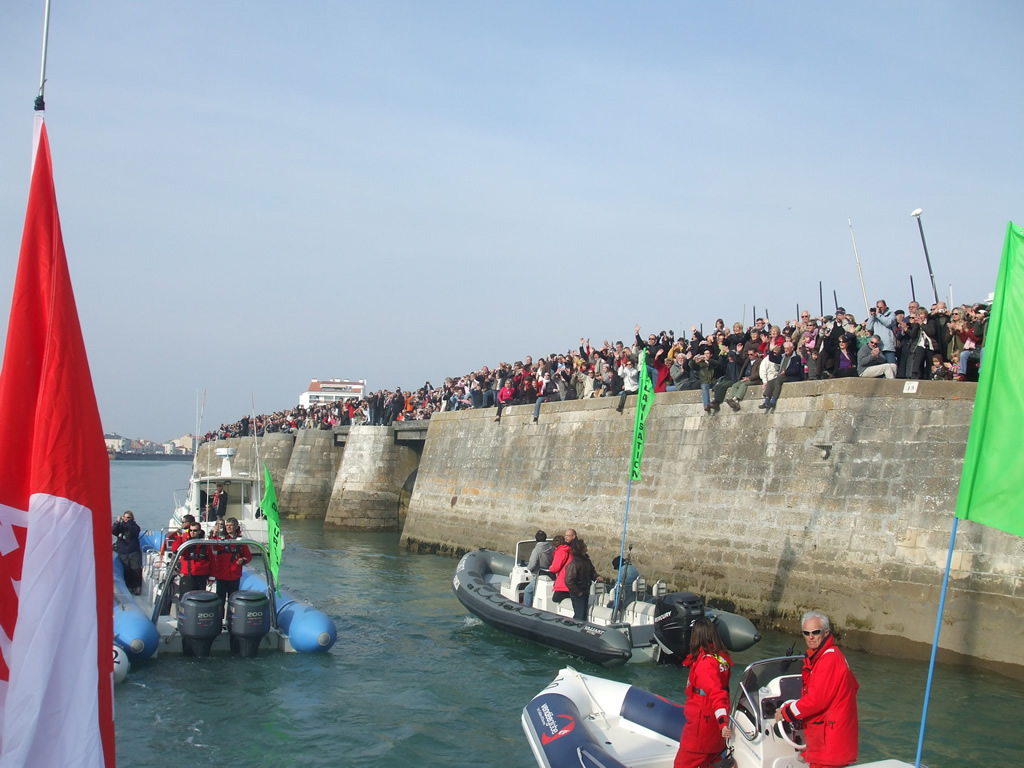 Finally triumphing after a frustrating duel with the prolonged easterly headwinds in the Bay of Biscay, British solo skipper Steve White sailed his Open 60 Toe in the Water across the finish line at Les Sables d'Olonne's South Nouch mark this afternoon at 12 H 38 MN 55 SEC GMT to take a commendable eighth place in the Vendee Globe solo round the world race.

Tired but triumphant, 109 days 0 hours, 36 minutes and 55 seconds after leaving Les Sables d'Olonne on Sunday November 9th, White was greeted by his wife Kim, and his three sons Jason, 19, Isaac 9, and Euan 6. He is the fourth British skipper to complete the race. Of the 30 skippers who started from the Vendee town over three and a half months ago, 19 had to abandon.

Of the seven British skippers who started the race, three were forced to retire. As White finishes, British skippers have taken four of the top eight places, a level of success for overseas soloists which is unprecedented in the legendary non-stop solo round the world race which was first contested in 1989.

White's result is much more than he imagined when he set off in November. While others were in peak fitness and had up to three or four years of planning and training behind them White's last minute preparations had left him on the verge of exhaustion as he left for the start, surviving a first horrendous storm on adrenalin, his wits and considerable seamanship skills. He only started sailing 12 years ago before becoming a career sailor in 1999-2000 when he worked his way up from crew to become a training skipper for Chay Blyth's Challenge Business. Before starting the Vendee Globe he had completed three Transatlantic Races. With Challenge Business he sailed to the Fastnet Rock 25 times in four years.

Despite the pre-race handicaps of lack of funding and preparation time White's circumnavigation has been impressive since the first Bay of Biscay storm which immediately accounted for four boats. He has always pushed to his limits in all conditions, light moderate and strong winds, consistently re-affirming that he was out there to race hard and be competitive. That he outlasted many more fancied, highly seeded skippers is down to his prudence, seamanship, sailing skills, keeping on top of the regular maintenance as well as being able to deal with the one bigger issue which might have ended the race for other skippers - when his gooseneck broke in the Southern Ocean. His eleven year old Finot Conq designed boat completed its third circumnavigation. Previously Gartmore, which also completed the Around Alone as Emma Richards' Pindar, as Toe in the Water White also bettered Josh Hall's 2001 race time for the boat (111days 19hrs 48 minutes) by more than two days on a course which is made more than 1200 miles (or four to five days) longer due to the ice security gates.

White's engineering and electronic skills stood him in good stead. In every respect he is the true self-sufficient soloist, proving himself able to deal with the intricacies and possible frustrations of re-wiring and rebuilding his aged autopilots, regularly reporting back to Race HQ having spent hours under his chart table of Toe in the Water in the desolate Southern Ocean, stripping and replacing slender wires of the dimension of human hair to resuscitate his fickle pilots. He started his race by having to bring his very essential computer keyboard back to life. Were it not so potentially serious, there was almost a comedic moment when he reported that he had melted a generator hose and shorted out his battery box and had a fire which filled his boat with a mix of acrid burning black carbon smoke, and a steam and diesel fumes some three days into the race.

In the Pacific Ocean approaching Cape Horn he also dealt with the fiddly business of repairing his mainsail headboard cars, removing and replacing dozens of tiny ball bearings. But his biggest success was the complex and ingenious repair to his gooseneck - which joins the mast to the boom - which required creating a composite support from laminated battens, which was secured to the keel head by dyneema lashings which passed through holes he drilled in the deck and kept tensioned by a Spanish windlass. In reality his repairs were occasional but fairly regular but in between he proved himself extremely able to drive Toe in the Water hard and fast, several times in the Big South, White was the quickest in the fleet over 24 hours.

Along the way his humour was irrepressible, sometimes quintessentially English schoolboy - with his Crikey!, Cor! and 'I'm dying for a beer' - while his keen, often wry observations made his blogs both informative, and entertaining, always on the right side of self indulgence and always written with wide-eyed spontaneity. While others either ripped blithely through the Southern Ocean dealing with familiar territory or simply struggled with it, White positively loved it and says that his sailing will never be the same. He remained patient and level headed throughout, well able to stay on top of his emotions, save perhaps Christmas Day when he missed his kids and was frustrated with not being able to push his boat hard enough.

His ambition at the start was to get round in one piece; short term it was to ride out the storm and finish his preparations, gradually building up his race pace. But at Cape Finisterre he was in 17th place, just less than 90 miles behind the leader and he simply kept a good steady pace, and sailed an astute course battling it out on the way down the Atlantic between compatriots Jonny Malbon and Dee Caffari. He passed the Cape Verde Islands in 16th place and was 19th at the Equator, as the newer boats slowly extended their lead.

He was simply unlucky to miss the window of opportunity in the Doldrums and lost 200 miles and is quick down the Brasilian coast. By the time they approach the first ice gate he within 62 miles of Arnaud Boissires and Dee Caffari and having a great race. He lost a little after the gate, and then compounded his losses slightly at the second gate when he failed to plot the new positions of the gate and had to double back.

By the Kerguelen Islands he was in 14th place and sailing a generally safe, intelligent course, occasionally battling with his capricious autopilots which cause him to wipe out many times and lose him many miles.

In some respects the Southern Pacific offered White some of the highs and lows. He was trapped by a high pressure system which let Caffari and Boissires gain more than 350 miles away from him in three days. Until then he certainly was driving hard with a belief he could catch them. But after that he hit is stride, lovingly describing the long surfs with his boat on song in the Pacific as some of the best sensations ever.

After rounding Cape Horn in ninth place, the Atlantic weather was both cruel and kind to White. Consistently sailing upwind virtually until the finish line in a boat which was never designed nor optimised for windward sailing, if he struggled for motivation he never let it be known and he continued to work hard with no other boat within 500 miles of him. He may have avoided the big low pressure systems in the South Atlantic, but he would have given his eye teeth to have ridden home on the heels of one in the North Atlantic this last frustrating week.

Since the Pacific White has been talking consistently and clearly about he plans and his desire to move on from this race, seeking a newer, faster boat and a budget which allows him to race on an equal footing. White's Vendee Globe has been not so much a Toe in the Water as one huge step in the right direction.